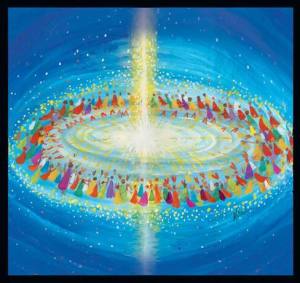 Before I get into more specifics regarding my Great-granddaughter’s early education, let me clarify some general points. Every being’s life is held in a context of Unconditional Love.  Every being’s life path is nurtured and directed lovingly. A new being is anticipated and welcomed into an environment of love. From birth through final transition each being knows only love. As this approach stands in such contrast to the educational experiences we may remember from our 3D lifetimes, I thought it important to emphasize this point before continuing with Mira’s story.

Mira’s Grounding Ceremony marked her introduction to the rest of our Pod members and opened a wider window of opportunity for all of us to begin participating in her education. Even though she was only six moons of age, Mira soon picked her favorites among us, showing a preference for the other children in our family. She especially enjoyed being carried around by the girls of about 8 – 12 solar cycles. Her cousin, Kurush (PRO: Coo-ROOSH) was a major exception to the “girl rule.” From the first time this boy cousin picked her up, Mira’s eyes tracked him everywhere, whenever he was in the vicinity. Perhaps one of the reasons for this was that Kurush has an exceptional singing voice and is also studying temple music, drums in particular.

We also noticed, as more of our Pod members interacted with Mira, that it didn’t matter who held her, as long as that person was dancing or singing. Mira’s eyes would become wide whenever anyone took her into a temple; her gaze would follow the flow of the scarves and energy swirls streaming and spiraling around and behind the other dancers. Her little mouth would grow round as she listened to the tinkling of the dancer’s bells and she would clap her tiny hands with joy and excitement just feeling the motion of the dancing through the body of whoever was fortunate to be carrying her at the time.

Shortly before she completed her first solar cycle, Mira surprised us by demonstrating her ability to stand and move about by herself. After that it seemed no “time” at all before she was dancing on her own everywhere she went. Strong willed and independent by nature, Mira refused to be carried after that by anyone, unless she had walked or danced herself to the point of exhaustion, in which case she would let only a few selected family members carry her home. At this point we had anklets made for her that featured fairy bells, stars and moons of the lightest weight silver. One of her Aunties wove her a rainbow scarf, so she could imitate the older dancers in the temple.

Between her first and second solar cycles, Mira’s education began in earnest, developing her mind, body and spirit. She learned swimming; first in the temple bathing pool with other children helping her become at home in the water. Then we took her out to the Great River in the Echadon Valley where we held her, floated her and encouraged her to harmonize with the singing waters. By the time she was two, Mira was swimming like a dolphin. Kurush spent many moments with her, allowing her to ride on his back while he dipped and swam. Mira was fearless, a blessing really, but nevertheless, a concern for her parents who realized their daughter would need careful guiding until she remembered her wisdom from prior lifetimes. Along with her swimming accomplishments, Mira also delighted in leaping off of high structures into the arms of anyone who was near enough to catch her. It caused a few of us to gasp a time or two, until we realized that this little being was bent on teaching herself to fly, which of course, she did rather quickly because of her great intention to do so. Her powers of concentration were remarkable. She could focus as long as any adult on whatever she set her mind to do. She had no difficulty sitting for meditation in the temple for any length of time and loved to stand close to the altar and watch the ritual ceremonies that are performed daily.

At the age of three solar cycles we began Mira’s formal dance and music training.  Because of her innate gifts in these fields, she was placed into classes with some considerably older students. This is common here, as all young beings bring innate talents and abilities from previous embodiments and thus they naturally excel in their chosen fields.  When she begins her studies of painting, mathematics and science during her next solar cycle,  Mira will most likely  be placed in a class with others closer to her own age.

Our young students are schooled in all the basics by the age of six. This includes reading and writing, math, science, history, geography, astronomy and personal relations. However, we only introduce these topics, unless there is a natural body of knowledge, in which case, the student is placed in accelerated classes for that topic. Learning is considered a natural ability in each being. Education is therefore initiated and directed by a student’s interest. We find our young people are curious and interested in everything; however, there are always preferences and we allow each child’s natural inclinations to lead them forward along their own unique educational path.

:
The teacher’s role is that of a mentor, skilled in the ability to recognize and develop each student’s natural gifts and inspire them to stretch and challenge themselves in the subjects that capture their interest. In this manner, each being continually grows and expands their subjects of study, increasing their body of knowledge from embodiment to embodiment. No one gets bored, because each student progresses at his or her own pace; it is a mentor’s responsibility to keep pace with the student, or turn that student over to a teacher who has a greater knowledge base in that subject. Mira will keep her teachers on their toes, we are sure.

In just a couple more years, Mira will complete her basic elementary education and be ready to enter her intermediary level of schooling. We expect her to be grouped with the advanced intermediary students in the classes for dancing and music, as she has brought so much previous training with her. I will resume this series on education in the future using other members of our family as the examples for these higher levels. I will share more about our teachers and mentors, as well as the various means through which learning can occur here in Aurora.

Next week we will venture out into the surrounding area of Aurora to visit one of the fascinating environments I spoke of in the episode View from the Observation Deck.  Stay tuned.

Once again I would like to acknowledge five major sources of Galactic and Celestial information that have greatly assisted me in “remembering” some of what our future may hold.

1) Barbara Marciniack — specifically, her books Bringers of the Dawn and Earth.

3) Mike Quinsey — scribe for messages from SaLuSa of Sirius

5) Dr. Suzanne Lie — scribe for messages from the Arcturians

This work is licensed under a Creative Commons Attribution-NonCommercial-NoDerivs 3.0 Unported License.

Copyright ©2012,2013 Susan Alia Chandler, All rights reserved. Creative Commons License by which author and publishers grant permission to copy, distribute and transmit this particular work under the conditions that use be non-commercial, that the work be used in its entirety, not added to, nor subtracted from, and that it carry author’s name and this full copyright notice.For other uses, Permissions: vision5d2012@gmail.com

I do not own rights to images sourced from Google; they are copyrighted by their creators unless otherwise noted. Unless stated in caption, image credits may be viewed by clicking on images.