Jaimie Robitaille, Designer and Co-developer of the QEG

Alia’s Comments: My friend, Harriet, sent me this vision for free energy from the Vision Alignment folks. This is a particularly dear-to-my-heart subject and part of what took Tomas and me to Morocco — the possibility of assisting with the development of a free energy device, the Quantum Energy Generator (QEG).

The QEG is now being co-developed by about 70 different groups who are sharing data and discoveries with one another. Jamie Robitaille, the designer of the QEG, which is based on a public domain patent of Nikola Tesla, is confident that this device is very close to becoming self-running. Although he had hoped to achieve this result earlier, he sees the “delay” in a positive light. As all 70 groups are now at a similar level of production, this means that when the self-running stage is finally achieved, it will be achieved simultaneously by 70 groups of people who are located all over the world.

In other words, it will be available to The People under circumstances that would be extremely hard to suppress. 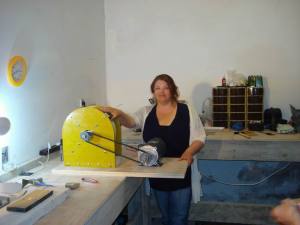 In a recent interview, Hope Moore (Jamie’s step-daughter and founder of Fix the World Project, the organization that sponsors the QEG) told us that the plans, which have been open-sourced and available on the internet since March of 2014, have indeed been downloaded by over 120,000 people. This alone is an extraordinary achievement!

In my viewpoint the QEG project has done more to raise awareness of the viability of We the People bringing this technology forth as a gift to all Humanity AND our planet than any other research or backyard development in this field.

The awareness of the QEG and its co-development by dozens of inter-dependent groups across the planet has informed the Quantum Field that “Not only is “free energy” possible, it is on the brink of being in use in every sector of human society.”

So as you read the Vision for Free Energy below, please know that there are many dedicated scientists, engineers and “just plain folks” who are currently working on a prototype for such a device. The co-development of the QEG serves as a powerful Hands-On Vision Statement that gathers momentum daily.

Please join me in affirming that this revolutionary technology is much closer to being implemented than most people might think.

A Vision For Free Energy

We envision ourselves living in a world where there is free energy for all, forever; where the sources of power we use to light and heat our homes, fuel our cars, run our appliances and machines, cook our foods, manufacture our goods and products, and so forth are non-proprietary; where all of the inventions that have purposely been withheld and hidden from us by those who would profit from our labors are revealed and made operational now; and where all of our energy systems are clean, non-polluting, and 100% sustainable.

In this world, our power sources are shared equally by all, for indeed, how does one pay the Sun back for the light we receive? How does one own the winds, the waters, the geothermal reservoirs? In a world where we truly care for one another, there are no charges, no exchanges of money; just thanks given for the gifts we receive from that which was already free in the first place.

I Align with this Vision!

Alia’s Comments: I came across this post on Wodener-Spirit Hawk and am re-posting it today. Eons ago, Humanity promised to steward the Earth. Some of us remembered. Some of us are remembering now. Returning to the Sacred Path of Earth Partnership is the way of the past and the way of our future. But we must begin now for that to be so. Blessed Mother, we are your children, returning home.

The Native American Indian lived in peace for thousands of years, living and working with Nature in a natural existence that respected the land and animals, mother-earth and in harmony with the great spirit.

This can also be said of many other tribal natives of the world. END_OF_DOCUMENT_TOKEN_TO_BE_REPLACED