Alia’s Comment: WordPress has not allowed me to add photos to my text for three days, so I created a FB album of related images for this post.  Enjoy the next installment of Tales of the Blue City.  Here is that link. You’ll need to copy and paste the URL — no active links available.

It took us five tries and about two hours to find the right hotel. We wanted a room with a bathtub and we found one at the very first place we saw but it was barely wide enough for me to lie in on my side and the hotel was so far away from the central part of the city that we would have needed a taxi for everything. So we had Nizaar park the taxi as close to the Medina as he could get and Azis began to take us from place to place, asking in his best Arabic for a room with a bathtub.

Basically, they don’t have them – because there are public baths throughout the city, so why would anyone want one in their room? The closest they could offer was a room with a private bathroom. Most rooms have SHARED baths.

So after our two-hour initial stairmaster routine, we came to the Hotel Molino Garden, a Moroccan fairy tale of Hobbit scale and we fell in love with the whole place. They had a room with private bath and many other amenities that we discovered shortly, including a gorgeous tropical garden. The prior owner (recently deceased) poured his heart and soul into the place, using a mill theme (there used to be five working grain mills in the area) and featuring grinding wheels prominently in the décor. He ran the property for 15 years and did much of the rock work himself (such as around our fireplace and in our bathroom) until he achieved the desired effect. His son, Austin and Austin’s friend and business partner, Chris, now own the hotel and move between Chefchaouen and Amsterdam where they both grew up.

We quickly settled ourselves in and sent Nizaar and Azis on their way (with much gratitude for their assistance) and proceeded to find ourselves a restaurant for dinner. It was by then 6 PM and for some reason, it felt right to order coffee. Later, as I lay wide awake at 2 AM, it didn’t seem like such a great idea but at dinner it was the thing to do.

Even before we had bread and olives in front of us, we had five cats sitting at our feet under our table. When the main course arrived, their number had grown to at least eight and they stared at us with such determination, beaming  their message: “You WILL share some of that bounty with us, won’t you?” It’s hard for me to refuse a cat (even a hardened street cat) and they did get several choice pieces of chicken as the meal progressed. Never in my life have I seen a CAT catch food in mid-air but these were desperados and only the hardiest survive. We call them the Blue City Kitties.

We spent the evening leisurely strolling through the bazaar (Souk) and taking in the richness of so many handmade offerings – textiles, leather goods, clothing, brasswork – nothing wrapped in plastic – each item in its natural state, waiting to be chosen and treasured in someone’s life.

We were so excited when it came time to retire, that we were like little kids, who would rather skip sleeping altogether and just start the next day’s adventures right away. It was getting on toward 11 PM but the streets were still full of children playing (with no cars to contend with, they stay out late, completely safe.) The adults, also, were taking advantage of the cooler hours to converse with one another and catch up with their families and neighbors. But eventually, the people quieted down and I thought: “OK, NOW I’ll get to sleep.”

WRONG! After 11 PM the DOGS come out. I am assuming that the dogs are kept inside during the day in order for the merchants to operate in peace. The mischief of cats is enough to deal with during business hours. And the dogs BARKED and BARKED and BARKED – until about 3 or 4 AM. The 6 PM caffeine order was still expressing itself in my body, so I heard them all.

Eventually though, the dogs settled down and I must have fallen asleep for a few minutes. I was abruptly awakened by the early pre-dawn call to prayer from the mosque next door. It was SO loud that I first thought there must be a device in our room that was broadcasting the morning message. AND — this was not the usual 90 second “commercial” for prayer: “Allah is Great! Come to Prayer. Prayer is better than sleep.” No, this was like the mosque came into our bedroom and delivered the entire morning message for about 15 minutes!!

Surely, after THIS I will get back to sleep.

After the people and the cats and the dogs and the mosque – the ROOSTERS got their turn. From all points in the city, the cowing of roosters greeted the “now official dawn of the new day.”

And with this sound, so familiar to me from both my childhood and my new life in Aouchtam, I fell soundly asleep until 9 AM. And this is the interesting part of the day/night cycle here – no one makes a sound in the morning until at least 8 or 9 o’clock. Everyone is as quiet as stones.

The second night, I did not drink coffee; I used ear plugs and understood the drill about dogs and call to prayer. I slept better. And by the third night, I felt as though I’d been living in the neighborhood for years. Life in the Blue City seems to have a rhythm all its own and I’m starting to pick up the beat.

Alia’s Comment: Once again, Justin and Julian from Stillness in the Storm blog have brought us an update on the QEG progress. Below their brief report is a more extensive one written by Dave Starbuck, a man from the UK who flew into Morocco with the equipment needed to take the QEG performance to the next level. His account is quite entertaining and his presence here was a gift. Dave is a “primo” human being. We’re drawing a lot of them here with this project. Enjoy this update. This historic event happened the day before my birthday and ranks as one of the best birthday gifts I’ve ever received — right up there with the birth of my granddaughter 16 years ago.

We got word there was Over Unity achieved within QEG system the other day. We just helped Jamie film another update, with more data points than before, demonstrating this Over Unity Power being generated.

However, this power can not be drawn out of the QEG until the circuit which pulls the power out can be completed. Jamie is en route to another QEG build location to finalize those designs and hopefully we will have a fully functional QEG with self running generator and power outputs at standard household rates soon. Jamie attempted to use parts from a Microwave in order to invert the power but this was not successful.

The following was released via the Be-Do Forums by “Allegedly” Dave whom spent some time there. He share’s his take on the QEG and towards the end reveals the power output of 3kW.

More Data to be revealed soon!

END_OF_DOCUMENT_TOKEN_TO_BE_REPLACED

En Route to the Blue City

The phrase “the journey is the destination” could well apply regarding traveling from Aouchtam to Chefchaouen, Morocco. The scenery between the two places is a moment by moment journey of majestic beauty and wondrous views.

We hired a private taxi and our Moroccan friend. Azis, accompanied us to make sure we got hotel arrangements to our liking. His neighbor Nizaar (not our neighbor, Nizaar) was our driver who took the curves gracefully and stopped the car whenever we asked so we could take photos and appreciate the breathtaking landscapes more fully.

END_OF_DOCUMENT_TOKEN_TO_BE_REPLACED 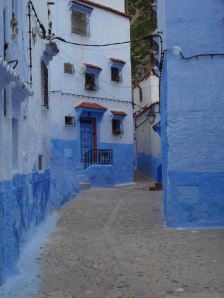 So now I understand what Tomas and I have been “in training” for: Our trip to Chefchaouen – the Blue City.

Here is the link to the original Moroccan Stairmaster post. http://wp.me/p2BC2S-G3

Everyone told us how beautiful The Blue City was and that once we got there, we wouldn’t want to come back but I don’t remember anyone emphasizing how rigorous it would be to navigate once we got there

BELIEVE ME – IT’S A WORKOUT!

Chefchaouen pronounced: chef (like a cook) show (like ow in “cow” or “now”) en (as in “then.”) This city of about 35,000 is inland an hour and a half from us through the steep, rugged mountains flanking the Oued Laou Valley.

Tomas and I decided to take a get-away and explore this ancient Berber city that was not even seen by non-Muslims until 1926. In other words, this city has remained relatively true to its pristine origins and I will have much more to say about that in a future post. 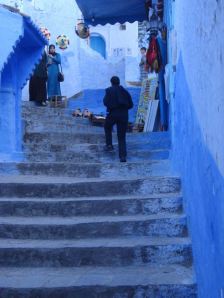 Thousands of Stairs of Random Height

This post is to make the point that all the stair climbing and walking we have been doing in Aouchtam paid off within the first couple of hours in Chefchaouen, because there are no motor vehicles permitted within the walls of the old city and the streets resemble an old medieval town, cobbled and steep. There are also thousands of stairs of random height, and of course, no street signs to make the process of finding your way any faster.

So by the time we had hiked about to find a hotel with a bathtub that was also in our price range (never did) we had expended the equivalent of several days’ worth of energy.

Up and Down and All Around 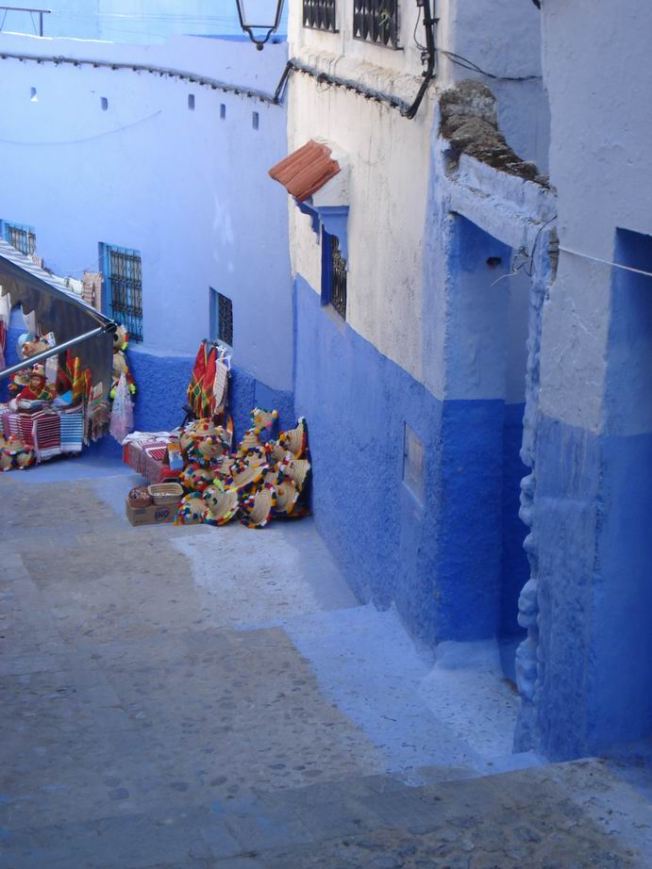 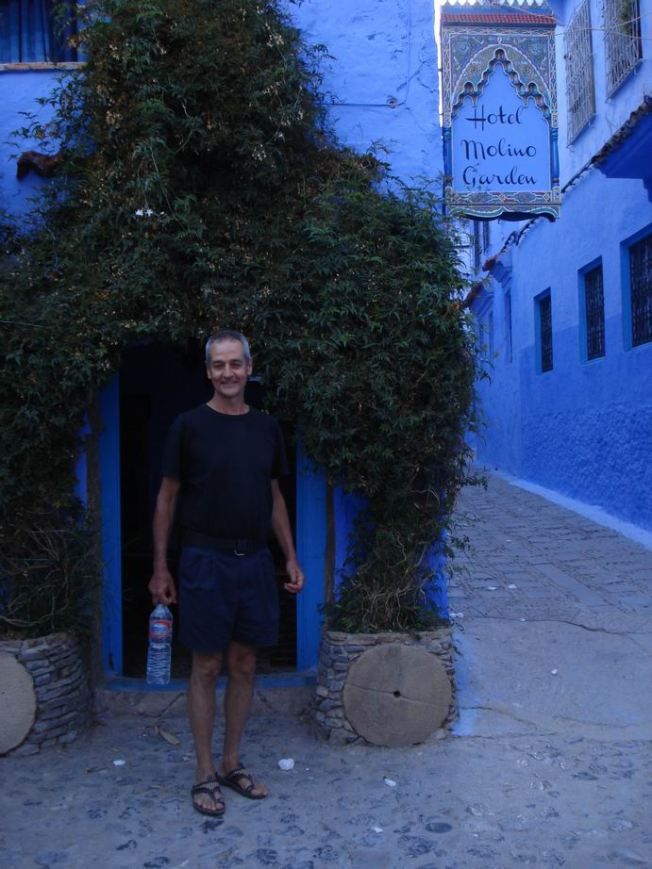 Finally the Right Hotel.
Can We Find Our Way Back?

When we first arrived at our apartment building, after nearly 24 hours of travel, we encountered a rather formidable set of stairs, leading from the street up to the ground floor.

Then we discovered that our apartment was on the third floor of that building and the interior staircase was not only formidable, it was treacherous!

WHAT WAS BRIAN THINKING?! PUTTING US “OLD FOLKS” UP ON THE TOP FLOOR!!!

Brian Kelly is the awesome dude that has taken it upon himself to handle the housing, transportation and basic apartment furnishings for all incoming One People Community travelers and residents, so we can sleep in nice beds with fuzzy blankets and have dishes and eating utensil when we arrive.

Every day for nearly six weeks, I have gone up and down these stairs at least once a day, often twice or three times. Add to the stair workout, the half-mile walks to and from the Sanctuary, or to the beach and the exercise program gets more demanding. Finally, add 12 – 15 pounds of groceries or water to that walk and set of stairs  and (in my case at least) you have a wonderful antidote for osteoporosis.

I knew there were a lot of stairs. I thought there were about 60 total. Yesterday I counted them. There are 41 on the external staircase and another 31 in the stairwell. 72 stairs total one way.

After six weeks on this rigorous program, my legs and heart are stronger than they’ve been in years, I’ve dropped a few pounds and my clothes are fitting better.

I LOVE LIVING AT THE TOP!